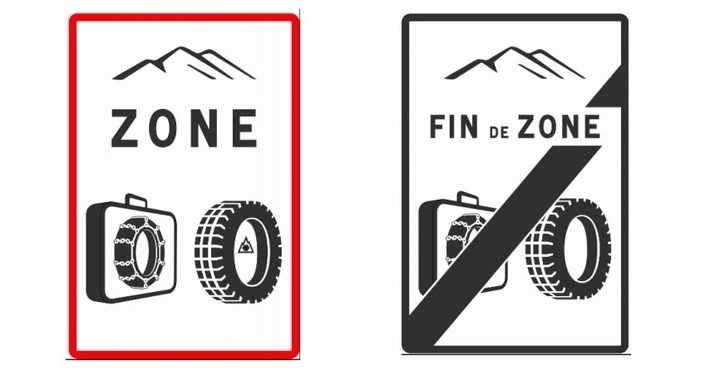 France has introduced a new law making it mandatory for cars driving on roads in mountainous regions to be either 1) fitted with winter tyres; 2) fitted with compliant all season tyres or 3) carry snow chains.  Roads where this is required will be marked with the above sign.

The law came into force on 1st Nov 2021 but it’s understood that no one will be fined within the first year – if you’re stopped you should be let off with a warning.

If you’re hiring a car you should check if it comes with winter tyres – otherwise you should hire snow chains. This change in the law does favour hiring on the Swiss side in Geneva, rather than the French sector – even though prices can be significantly higher. Cars from the Swiss side usually come with winter tyres as standard (plus the Vignette sticker for driving on Swiss motorways – saving £30).

Of course you can hire snow chains but have you ever tried to put these on with frozen fingers, at the edge of a narrow mountain path with snow coming down and cars slipping around you. And on several occasions I’ve booked them they were not there at pick up. Or worse, I was once given the wrong size and struggled getting them on if awful conditions before abandoning the car (and family) to find a garage. Plus if you buy locally you usually have to dump them as they are very specific to the tyre size.

I have now invested in a set of universal snow chains that fit a wide range of tyre sizes like these. I’ve used them a couple of times on rentals. They are not as good as snow chains but definitely improve traction . And they are a lot easier to put on. Whether they are compliant with the new law I don’t know but we’ve never been stopped with them on.

This site uses Akismet to reduce spam. Learn how your comment data is processed.